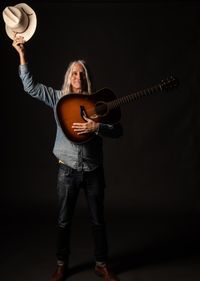 Over the years, the Nashville-based troubadour has built a fascinating solo catalog, earmarked by his debut, One Left Shoe, Dreamhouse, Folk Singer, and 2019’s Shine On. No Depression crowned him, "A sardonic provocateur with a lighthearted acoustic-driven wit, suggesting at times a sunnier, less psychedelic Todd Snider, or maybe a less wan, washed Jackson Brown,” while the Associated Press dubbed him "part busker, part Iggy Pop and part Robin Williams, a freewheeling folkie with a quick wit and big heart.”

He’s resumed his tour schedule, and when he comes to your town, he’ll say, as he does every night, “This is the best show I’ve ever played.” And hell, maybe it just is.