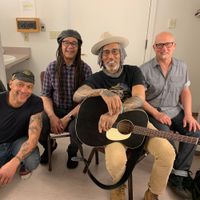 LeRoy Bell & His Only Friends

LeRoy Bell is an American singer and songwriter. He and his friend Casey James played in Special Blend, and then went on to form their own duo Bell and James, also composing songs that were hits for other artists most notably two charting hit singles for Elton John. Later Bell became a member of the trio Only Friends. In 2011, Bell applied for the American The X Factor and was chosen for the Final 16 and went on to the live shows being mentored by Nicole Scherzinger. He was eliminated after the fifth live show finishing 8th overall in the inaugural season of the American The X Factor when he was in bottom three with Marcus Canty and Lakoda Rayne.