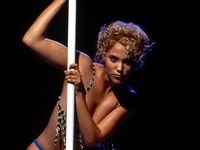 “What Schmader does is crystallize the consistency of the movie's badness, revealing even seemingly innocuous moments to be part of an intricate pattern of badness that affects every aspect of the film. It's marvelous.” —Hollywood Reporter

Upon its 1995 release, Paul Verhoeven’s glitzy stripper drama SHOWGIRLS earned some of the most extravagantly awful reviews in cinema history. “A film of thunderous oafishness,” wrote Kenneth Turan of the Los Angeles Times, with critics around the globe damning Showgirls as a failure doomed to die in infamy.