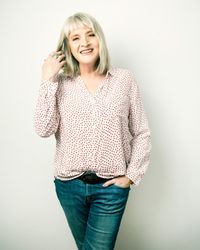 “I started off that record scared to death,” Kim Richey recalls of making ​Glimmer​ with producer Hugh Padgham back in 1999 in New York and London. A disastrous haircut, unfamiliar musicians, and oversized budgets didn’t help matters. “It wasn’t the way I was used to making records.”

The way Richey was used to making records was with friends in a vibed-out, low-key setting. That’s how she made her debut album with Richard Bennett, and it’s how she made her new album, ​Long Way Back… The Songs of Glimmer, ​with Doug Lancio. So Glimmer​ was different, and not just on the production side.

Then, as now, the compositions that comprise ​Glimmer​ were the Grammy-nominated singer/songwriter’s first collection of true confessionals. Prior to that she’d been a staff writer at Blue Water Music writing from a more arm’s-length vantage point for her first two releases, 1995’s ​Kim Richey ​and 1997’s B​itter Sweet​. But ​Glimmer ​was all her.