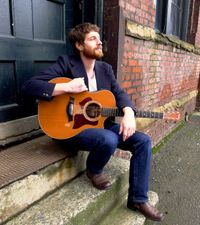 Ian McFeron got his start performing for dock workers and fishermen in the Irish pubs and dive bars along Shilshole Bay in the Ballard neighborhood of Seattle, WA. When the single from his debut album, Don’t Look Back was picked up by famed Seattle radio station KMTT 103.7 “The Mountain”, McFeron found himself on a larger stage, performing with international artists like Patty Griffin, Sister Hazel, Shawn Mullins, Brandi Carlile, Mike Doughty, Amos Lee, and Hayes Carll.

Early success in Seattle drew McFeron into a full-time recording and touring career. He would spend the next decade performing throughout the United States, growing a national audience and attracting media attention stretching across the Atlantic.

“Soaked in California sunshine one minute, then deep in the dustbowl the next, it’s like a greatest hits of everyone you like.” -Rudie Humphrey Americana UK