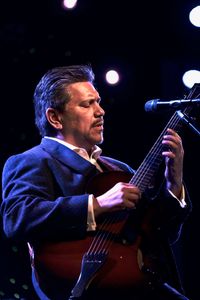 Vivify Music Recording Artist and Benedetto Guitar Artist, Brian Nova, is considered one of the top Jazz Guitarists/Vocalists in the nation. Joe Pass said of Nova: ‘I feel Brian is one of the finest Jazz Guitarists on the scene!’ He has the distinction of being the only guitarist who was mentored by, and toured with the two titans of Jazz guitar: Herb Ellis and Joe Pass. Rock Icon, Steve Miller, says: ‘I’ve met and known a lot of guitarists in my career, and ‘B’ is the best guitarist I’ve ever met.’

Brian is back home in Seattle where he first started his career and many musical music venues, including the original Wild Ginger, and was one of the original acts for The Triple Door. He is excited to bring his Trio with Shelly Berg to the Triple Door!