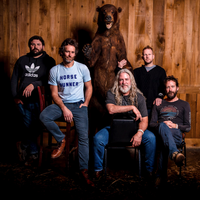 “It felt so good to get back on the road again in 2021. It was a huge relief, with safety on everyone’s minds, to know that the efforts were paying off,” says Carbon Leaf frontman Barry Privett.

“The systems worked very well we were able to connect through live music once again. When we got home in December, we went right to work writing and recording. We wanted this album to have a little bit more fun than our 2021 release, Gathering 2: The Hunting Ground. This new album will be expanding that neighborhood, musing on space and time, and the brief moment we get to experience it as Earthlings, if you will.”

The ongoing Gathering series the band has been working on over the last few years is all about building community.

“It’s a call to look inwards and find what matters, an invitation to reach out and embrace the gifts of human connection.” Privett says.

That’s no mean feat given the deep divisions that have defined much of the past few years of American life, but Carbon Leaf has always punched above their weight, defying the odds at every turn and redefining what’s possible for a modern indie band in the process. The group’s extraordinary new mini-album, Gathering 2: The Hunting Ground, is no exception. Recorded at the band’s own studio in Richmond, VA, the collection marks the second installment of the group’s four-part Gathering series, which finds the long-running quintet stripping their sound back to its organic, acoustic core as they reckon with our ever-conflicting desires for unity and independence. The songs here are gutsy and probing, grappling with grief, loss, anger, and pain, and the arrangements are aggressive and insistent to match, fueled by layers of relentlessly strummed guitars, rolling banjo, and lush fiddle. The result is a moving, cathartic collection that’s unafraid to confront darkness and doubt head on, a poignant, revelatory record all about the power of self-reflection and the ties that bind.