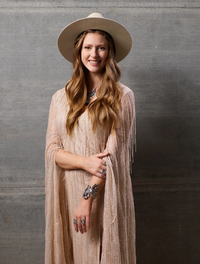 At the age of 12 Zan broke away from the molds of her classical music training and experimented with enmeshing forthright lyrics, cinematic melodies and explosive synth sounds into her songwriting. She went on to release her first 6 singles and achieved over 2 million streams on spotify alone.

Just 2 years later, Zan made her national debut on NBC’s The Voice as a top 9 finalist and received recognition for her dynamic performing and voice from Billboard magazine, Maggie Rogers, Camila Cabello and the Indigo Girls. Zan then launched forward with full force and started her band and wrote and released her debut album “Sleeping Problems.” She wanted this project to be brutally honest and to fully expose the wounds that inspired these songs. She has since found herself performing in iconic Seattle venues such as The Moore Theater, The Triple Door, Sasquatch and more, leaving her audience awe struck each time.