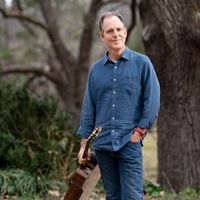 More than three decades into his career, singer/songwriter David Wilcox continues to push himself, just as he always has. Wilcox, by so many measures, is a quintessential folk singer, telling stories full of heart, humor, and hope, substance, searching, and style. His innate sense of adventure and authenticity is why critics and colleagues, alike, have always praised not just his artistry, but his humanity, as well.

That's very much by design. It's the result of a man giving himself over in gratitude and service to something bigger than himself. An early '80s move to Warren Wilson College in North Carolina set his wheels in motion, as he started playing guitar and writing songs, processing his own inner workings and accessing his own inner wisdom. In 1987, within a couple of years of graduating, Wilcox had released his first independent album, The Nightshift Watchman. A year later, he won the prestigious Kerrville Folk Festival New Folk Award and, in 1989, he signed with A&M Records, selling more than 100,000 copies of his A&M debut, How Did You Find Me Here.