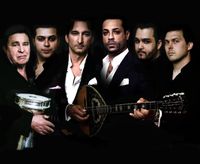 Our new show resembles a Vegas production more than anything else. It's pure class. It's a night out at The Copacabana in the 40's. The ultimate get dressed-up and have a classy night out show.” - Johnny Bacolas

"Our goal is to take our audience on a trip around the Mediterranean." - George Stevens

KNKX 88.5 FM Presents The Rumba Kings featuring Arcobaleno Strings and special guest performers! Get dressed-up ready for two nights of the most passionate Mediterranean-inspired music imaginable, accompanied by a live performance that is the talk of the Pacific Northwest! Catch the band in our intimate theater before they ascend to international status! Their new single, "Dance with me" is being praised and shared by top radio personality, Delilah, on her social media. Seattle's KNKX has been a proud supporter of their live shows and music from the beginning.